Africa’s air cargo industry primed for growth despite all odds 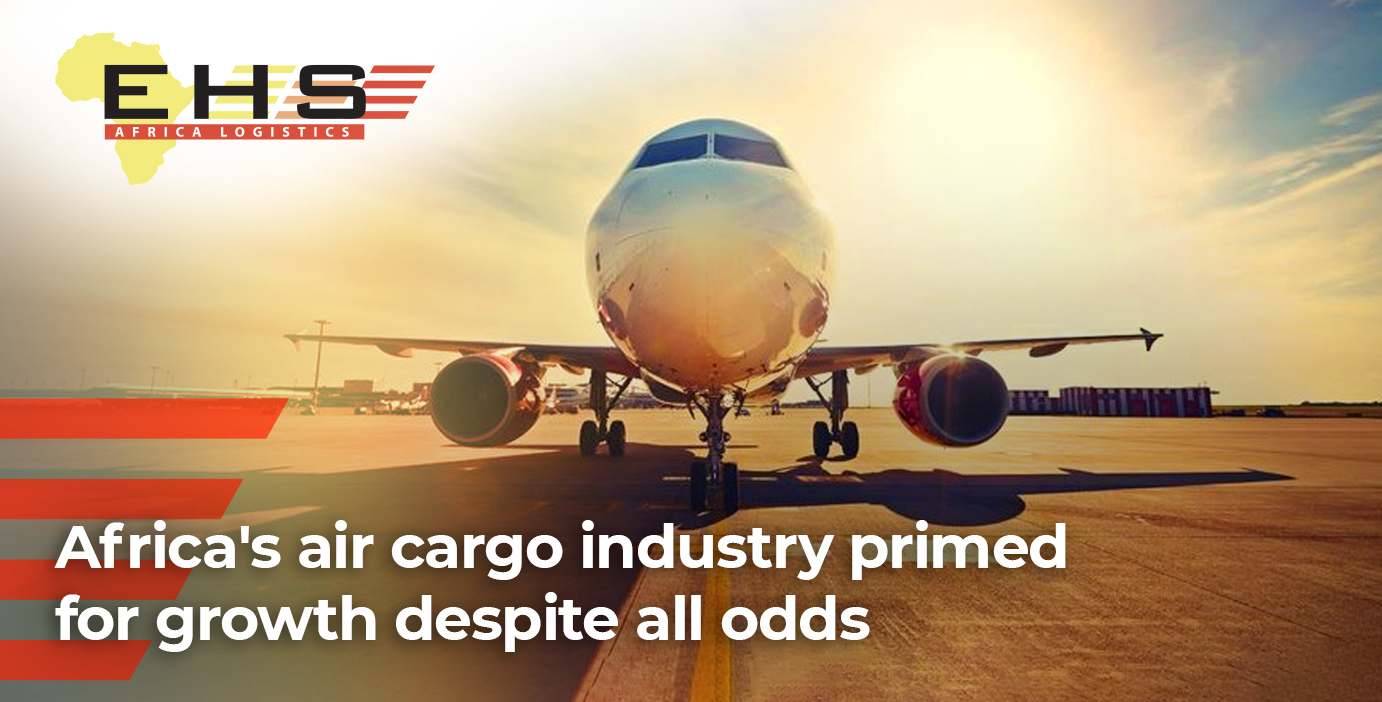 The African air cargo sector is confronting challenges like fuel pricing and connectivity within the continent and with the rest of the world, particularly since the world views Africa as an opportunity.

Africa’s airfreight and logistics business is expanding as it recovers from the pandemic, drawing major investment. There is an investment in new and modified freighter aircraft, upmarket cargo drones, cargo ground handling sector convergence, and more. This report talks about Africa’s developing aviation business and how governments might help it flourish.

Astral Aviation is adding three Boeing B757-200Fs and two Airbus A320 P2Fs to its 14-freighter fleet, while Kenya Airways Cargo has received a number of fleet extension proposals, which are now being examined and assessed by the leadership board. Ethiopian Cargo & Logistics Services recently announced the launch of a new domestic cargo route to Dire Dawa and Jigjiga, which would operate three times per week beginning August 30.

Aero Africa, a leading air cargo management group, has announced the opening of a new regional office in Nairobi, ideally placed at Jomo Kenyatta International Airport, to better service our customers with neutral airfreight import consolidations from across the world to East Africa.

“The new office will look after the group’s interest in the region, operating as a control tower and centralized service center in East Africa for its overseas partners and clients. It will focus on promoting Aero Africa’s digital airfreight portal, developing BSA scheduled consolidations from the USA, Asia, and Europe to East Africa, and providing innovative air cargo solutions & value-added services to the East African freight & logistics community,” said Absolom Ngari, General manager, Aero Africa.

With a rise in cargo volumes and airline operators in Africa on the verge of development, collaboration, and expanding business, it is apparent that the continent has the capacity to thrive; all it needs is prospective government backing.

The African market is particularly intriguing because aviation traffic is predicted to double in the next 20 years. High-profit margins and consistent passenger growth make Africa an attractive market for many multinational airlines. With traffic expected to double in the next years, Africa will draw not just additional stakeholders, airlines, investors, and financiers, but also the whole business world.

“Yes, opportunities do exist, but a lot needs to be done in fast-tracking and implementation of policy frameworks including the Single African Air Transport Market (SAATM) as envisioned three decades ago as the first flagship project under AU Agenda 2063. The challenge that Africa must deal with and do so with some urgency, is to consolidate its aviation assets to enjoy economies of scale and the efficiencies that come with it. Currently, the aviation sector in Africa is fragmented and risks the fruits of the opportunities envisaged going to foreign carriers,” said Dick Murianki, Director of Cargo, Kenya Airways.

Start-ups and new businesses are also eyeing Africa to be the next hub to boost their aviation business. One such company is Airblox, a pioneer in aviation fintech, which offers a live feed of worldwide scheduled air freight aircraft capacity to help clients of its eBSA booking service.

Airblox is new to the African market and is looking forward to starting to serve African airlines. “As infrastructure in Africa improves, charter flights and consistent air cargo capacity for items such as pharma, food, and other perishable cargo will also increase. Utilizing standardized eBSAs will help establish the foundation for this market to be more efficient and transparent in pricing,” said Edip Pektas, Founder, Airblox in a previous interview to Logistics Update Africa.

How is African aviation performing?

According to UN data, Africa offers a higher return on investment than any other emerging market. For several reasons: Competition is less intense and few foreign companies have a presence there, and pent-up consumer demand is strong. Companies that desire revenues and profits, we believe, can no longer ignore Africa.

With the accelerated economic growth on the African continent and the matching increase in logistics activities from direct trade with the Far East as well as the world, it has become critical to provide the logistics and aviation sector with a tailor-made simplified neutral air cargo solution, supported by a secure financial transaction platform in which to conduct air cargo business with Africa.

“Africa is greatly investing in infrastructure development that supports global trade, modernization of airports, seaports, airlines, etc. Africa airlines’ investments are a priority, with Ethiopian Airlines and Astral Aviation’s fleet expansion on the top of the list. Liberalisation of markets and initiatives to reduce the imbalance of trade between countries. Recent avocado export to China out of Kenya is seeking to reduce the adverse imbalance of imports to Kenya and export to China from Kenya. The truth is, this is just the first step of a very long journey as Kenya’s trade deficit is very wide,” said Jade De Costa, CEO, Aero Africa.

Cargo demand for African airlines recorded its fourth consecutive month of growth with an increase of 30.6% in international CTK for April 2021 compared to the same period in 2019. Demand in Africa was the strongest of all the regions with consistent CTK levels above 25% compared to 2019 data.

Following the capacity constraint difficulty caused by the pandemic, which increased airline rates, the industry is concerned about rising fuel prices and their effects. Global demand is high, owing to the reopening of airspace and increased travel. Prices will be heavily contingent on the resolution of geopolitical concerns in the future.

“We have seen very volatile fuel prices in recent times and the same has caused disruptions in the supply chain and erratic supply/stock-outs in some locations. Customers will have to adjust their expectations and accept some elements of increased freight costs as airlines will be forced to transfer part of the increased fuel costs to them. Already, several carriers have imposed some form of fuel surcharges,” said Murianki.

The fuel price increase is an issue and Aero Africa thinks that the government can intervene and find a balance for a smooth trade.

“The government can negotiate bulk order purchasing costs at the individual or regional level. Authorities can provide subsidies to people who import fuel. Regional integration, as well as bilateral and multilateral trade agreements, can help to improve connectivity. For example, the African Union, East African Community (EAC), Economic Community of West African States (ECOWAS), and African Growth and Opportunity Act (AGOA ) and the purpose of this legislation was to assist the economies of sub-Saharan Africa and improve economic relations between the United States and the region. The government can attempt to balance trade and correct trade deficits. Market liberalisation and easing trade restrictions can also be beneficial,” said Costa.

A revision of the present fuel taxation scheme is necessary to provide the airline access to more competitive fuel. Fuel prices in some locations are artificially regulated by monopolistic techniques, primarily by government-affiliated fuel marketing entities. These can be avoided for Africa’s aviation sector.

In an earlier interview to Logistics Update Africa, Racheal Ndegwa, CEO of Swissport Kenya, identified connectivity as one of the challenges she believes Africa faces.

“Africa’s air freight market contributes 1.9% of the world’s air freight traffic, according to the IATA 2021 statistics. For me, this percentage represents a great opportunity for the growth of Swissport in Kenya and beyond. I believe the challenge we are facing in Africa in terms of air freight is connectivity – we must increase intra-Africa traffic to allow more efficient and fluent air transport,” said Ndegwa.

Despite a phenomenal population increase over the previous 50 years, Africa’s aviation network has trailed. Those looking to travel between Nigeria’s megacity of Lagos and Egypt’s capital of Cairo must make do with a single daily direct flight – and on some days, none at all.

This is the degree of service provided by two metropolises that rank first and second among Africa’s most populated cities, with a combined population of more than 20 million people.

“Yes, there is a connectivity issue caused by different causes such as insufficient infrastructure, uneven trade tariffs, restricted borders, political conflicts, and so on, but the solution is to stimulate the growth of local and regional air cargo operators. Regional integration in terms of bilateral and multilateral trade agreements within the continent, e.g. EAC, ECOWAS, SADC, etc., government prioritisation of development of supporting infrastructure, e.g. airports, customs bonded warehouses, cool chain facilities, and highways, and harmonisation of intra-border trade tariffs, levies, and taxes.”

Africa is ready to welcome all the opportunities coming their way. According to the 2021 Airbus Global Market Forecast (GMF), the continent’s predicted economic development would propel air traffic to a full recovery to 2019 levels between late 2023 and early 2025.

The industry experts believe that investors sometimes neglect Africa as the smallest region for aviation services. Operational and policy difficulties contribute to increased perceptions of risk and operating expenses. However, as the globe slowly recovers from the epidemic, there are numerous programmes available to reduce these issues and help the rehabilitation of a more robust and sustainable sector. These will require time and discipline to accomplish, but the continent’s underserved market offers substantial prospects for investment and growth, particularly in the regional and air freight sectors.