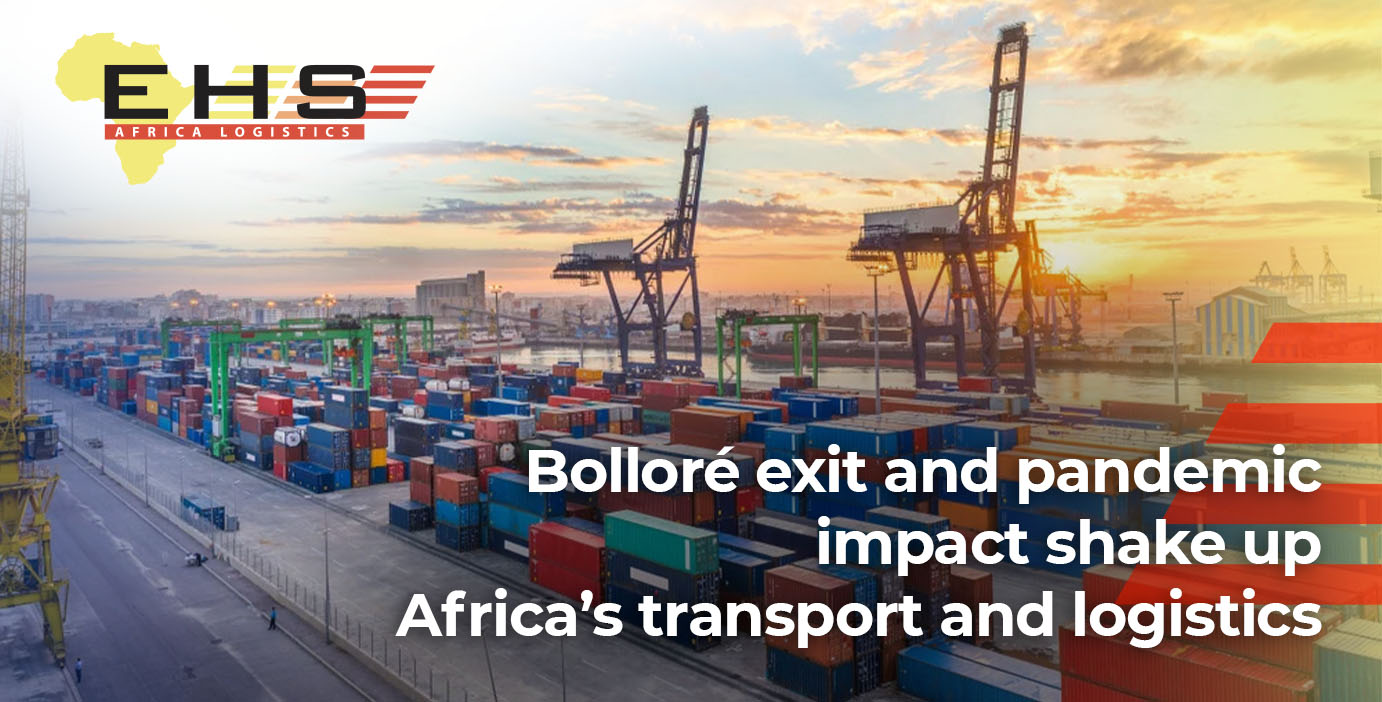 The French giant’s decision to leave the continent and the ongoing impact of Covid-19 are prompting upheaval in Africa’s goods transportation industry.

African ports, like their counterparts elsewhere in the world, have been profoundly affected by the Covid-19 crisis. Trade volumes tumbled during the early months of the pandemic but a small number of ports actually managed to record some growth over the course of the crisis.

However, the recovery has pushed up demand for containers, resulting in record freight rates, which in turn have increased the cost of moving cargo in and out of Africa. Port development continues to focus on West Africa, while the continent’s biggest operators have announced some interesting strategies over the past few months.

Investment by the Chinese government and Chinese state-owned companies in African transport projects has declined dramatically in recent years but port investment remains strong as international operators have been joined by at least one development finance institution in upgrading port, warehouse and inland port infrastructure.

However, it remains to be seen whether reduced Chinese loans for African road and rail projects will be replaced.

One of the biggest recent surprises in the African logistics sector over the past few months has been Bolloré’s decision to pull out of the industry.

The French conglomerate has been a major player over many decades, with operations ranging from ports and shipping to rail and warehousing, and the firm had expanded its operations over the past two years, despite losing its concession for Douala container terminal in Cameroon. It is in exclusive talks with Swiss-Italian shipping line MSC over the sale of its entire logistics operations on the continent. MSC has offered $6.43bn.

The sale appears linked to founder Vincent Bolloré’s decision to retire in February 2022 and hand control of the company over to his four children. Moreover, a French court imposed a €12m fine on the company over financial irregularities relating to a port concession in Togo.

The sale will see the family conglomerate lose about half of its current operations, with its 27% stake in media group Vivendi its biggest remaining asset. Bolloré’s logistics operations employ 20,800 people, including at 16 African container terminals, mainly in West Africa.

The sale of Bolloré assets to a single buyer should not weaken competition in the African port sector. Indeed, if the sale to MSC is completed as envisaged, it could lead to greater integration between the division’s logistics operations and MSC’s shipping services, which already connect African ports to the rest of the world.

The deal will be watched with great interest by Bolloré’s main competitors in logistics and terminal operation in Africa, such as DP World and APM Terminals. Although headquartered in the Netherlands, the latter handles port operations as part of Denmark’s Maersk group. Maersk is currently the world’s biggest shipping line, just ahead of MSC.

In November, Maersk announced that it would merge its inland container terminal business in Africa with the container logistics business of South African firm Grindrod, creating an integrated company with interests in road, rail and sea transport, container depots and warehousing. The Danish firm will take a controlling 51% stake in the new company.

Jonathan Horn, Maersk Southern Africa and Islands Area managing director, said: “We will have a far greater ability to seamlessly integrate solutions between ocean and the landside whilst weaving into our organisation an increased capability and experience through colleagues from Grindrod, who has long held a strong reputation in the landside logistics space.”

Meanwhile, Dubai-based DP World has recently concluded its own cooperation agreement, in this case with the UK government’s development finance institution CDC, which is to invest $320m in the DP World-operated ports of Sokhna in Egypt, Berbera in Somaliland and Dakar in Senegal. The money will be used to support the development of the ports and associated free zones, inland cargo handling facilities and inland transport infrastructure.

DP World will add another $1bn to the money it has already committed to the three ports. Another $400m will be invested by CDC over the next several years, although the intended investment targets have not yet been announced.

DP World appears to be developing Berbera in direct competition with Doraleh container terminal in neighbouring Djibouti, which it previously operated, although it is not clear if it was ejected from its concession by the government of Djibouti because of its interest in Berbera, or whether it expanded its plans for the Somaliland port once the government of Djibouti had made its intentions clear.

Whatever the cause, the Port of Berbera is now being developed as the centrepiece of Somaliland’s economic strategy.

CDC’s decision to support the project provides more economic support for the territory, which has ambitions of being recognised as a sovereign state. The UK government is broadly warm to the territory but does not currently recognise Somaliland’s independence despite support in parliament.

In addition, a fact-finding mission from the US Congress visited Somaliland for the first time late last year. Somaliland has generally been more stable and enjoyed more rapid development than Somalia itself over the past three decades.

Berbera will provide Djibouti with competition for the landlocked Ethiopian market, particularly given the Ethiopian government’s decision to invest in the emerging port.

In a statement, CDC said that the investment would “help drive much needed development for some of the most vulnerable in Somaliland and support the continuing growth of Ethiopia, which will have a positive knock-on effect on the wider Horn of Africa region”.

While DP World has already upgraded the Port of Dakar, in January it began work on building the new port of Ndayane, just 50km south of Dakar, just over a year after it was awarded a 25-year concession to operate the port.

It had originally planned to build a new container terminal at Dakar but ultimately settled on the new location, where far more land is available closer to the new airport of Blaise Diagne International, creating what DP World has described as “an integrated multimodal transportation, logistics and industrial hub”, with road, air and sea components.

Ndayane will be developed at a cost of more than $1bn in two phases, with 1.2m TEU/year handling capacity provided in Phase 1 alone. A TEU is a 20-foot equivalent unit, the standard container measurement. The company says that dredging of the harbour and entrance channel will allow access for some of the world’s biggest container vessels, which suggests that it will be at least 16m deep and possibly up to 19m.

Senegal’s President Macky Sall said: “With the Port of Ndayane, Senegal will have state-of-the-art port infrastructure that will reinforce our country’s position as a major trade hub and gateway in West Africa. It will unlock significant economic opportunities for local businesses, create jobs, and increase Senegal’s attractiveness to foreign investors.”

The biggest port in West Africa is Tema in Ghana, where Phase 2 was completed in October. With annual handling capacity of 3.7m TEU, the consortium operating the container terminal includes two of Africa’s biggest operators, APM Terminals (35%) and Bolloré Transport and Logistics (35%), alongside Ghana Ports and Harbours Authority (GPHA) (30%).

Tema and Ghana’s second port, Takoradi, have been greatly expanded on the back of Ghana’s economic development over the past decade, and in December the GPHA asked for expressions of interest from potential developers in financing and building the first $600m phase of a third port at Keta.