How Can Africa Get Ready for the Latest Generation of Container Ships? 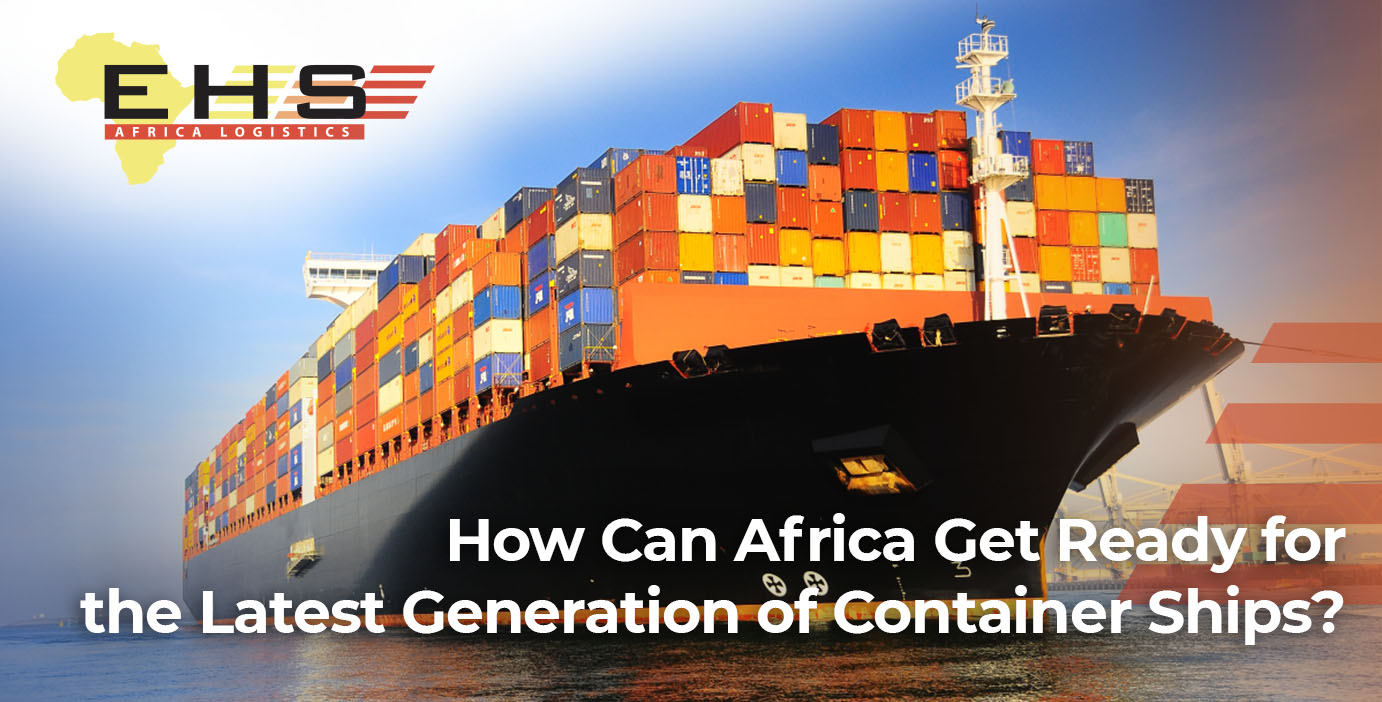 Over the past few years, a new generation of ultra-large container vessels has begun to sail the oceans. Container ships like the Madrid Maersk, COSCO Shipping Universe and OOCL Hong Kong can carry over 20,000 TEU of cargo. These giant vessels measure over 1,300 feet in length, with beams of between 160 and 190 feet and a draft of 52 feet.

Over the past 50 years, the capacity of container vessels has increased by around 1,500 percent, doubling over the past decade alone. The exponential growth of container vessels can be attributed to shipping lines’ focus on economies of scale. The more containers they can load on a vessel, the greater the income generated by these vessels. Thus, larger vessels carrying more containers increase the profit per voyage for each vessel. The increase in capacity relates to significant changes in the length, depth, and beam of a ship.

However, the extreme size of the new generation of container vessels is creating a new set of physical problems. For example, the Ever Given blocked the Suez Canal – and a large portion of global trade – for six days in March. Furthermore, draft restrictions (like those at the Panama Canal) limit where these ultra-large vessels can go. Seaports are not evolving at the same pace as shipping lines and container vessels; thus, not all ports are deep enough or well-equipped enough to accommodate the latest big ships.

Containerized cargo trade started in the mid-1950s and has evolved into six overall waves of changes, each representing a new generation of containerised ships. Early container vessels were usually modified bulk vessels or tankers that could carry around 1,000 TEUs. As containerized cargo developed, the first cellular vessels were introduced in 1968, and these could carry stacked containers in racks (cells). By the 1980s, shipping lines grasped the opportunity of economies of scale and pushed for the construction of larger vessels, which gave birth to the “Panamax” generation. These vessels were designed to fit through the Panama Canal, and once this threshold was breached, ship sizes quickly increased, allowing for more carrying capacities.

In June 2016, the Panama Canal expanded, contributing to the New-Panamax, or Neo-Panamax (NPX) range of vessels. A further expansion on these vessels led to the Ultra Large Containership (ULCV) and the Megamax-24, which are larger than the limits of the Panama Canal. The latest vessels are near to the maximum dimensions that the Suez Canal can accommodate.

New generation container vessels and the case of Africa

African countries’ trade relies heavily on seaports and shipping, as most of their trade is sea-borne. In 2019, African ports represented close to seven percent of world maritime exports and about five percent of global maritime imports, according to UNCTAD.

For many African countries , it has been challenging to develop ports of entry and connected transport infrastructure that keeps up with the growth trend of containerized vessels. Many of Africa’s ports are not deep or wide enough to handle such large vessels. And should the vessels be able to berth at African ports, the ports would still need the equipment to offload such large vessels.

Keeping this in mind, one should also consider whether the African market will have sufficient demand and supply of cargo to be accommodated by larger ships. Are there enough additional trade opportunities for imports and exports to make it worth the cost? The cost of deepening and widening the berths at ports of entry, the cost of purchasing additional loading cranes, and the need to upgrade infrastructure within the ports should be justified by the expected increase in volumes of cargo and income.

More than ever, port performance has become a significant aspect in the context of the choice of a port by regional and international stakeholders. Importers or exporters may opt for the port that saves them time or money. For shipping lines, the longer a vessel stays in port, the more money is lost, which means that shipping lines tend to favor ports where their vessels are serviced as quickly as possible. This situation puts even more strain on African economies trying to secure international market share. According to UNCTAD, the average time container vessels spent at a port in 2018 was around 0.7 days. According to this analysis, all ten of the slowest nations for container vessel servicing are developing or least developed countries. In contrast, the economies with the fastest turnaround times are mostly advanced economies with large volumes (or small economies that handle low cargo volumes at each port call).

How will Africa get on board?

Certain African countries allow for significant foreign investments in port and hinterland infrastructure to accommodate increased volumes and perform on international standards. From terminal and depot developments to double-stack railway infrastructure innovations, foreign investors have gained market share in these sectors. However, this has left countries like Kenya and Djibouti – as with many other African countries – losing their sovereignty and critical economic resources. Governments should prioritize investments in port facilities and infrastructure to grow and perform as per international standards.

In the wake of the Covid-19 pandemic, digitalization has been recognized as the key solution to ensure business continuity. Unfortunately, a “readiness gap” in the maritime sector’s automation and technology levels puts African countries at a disadvantage. Consequently, capacity-building in this area is required.

African countries will need to focus more on diversification to integrate into regional and global value chains. It means shifting resources to manufacturing opportunities and concentrating on value-added products. However, trade policy and regional integration initiatives such as the African Continental Free Trade Agreement (AfCFTA) will not be enough for this to happen. Instead, targeted interventions by national, regional, and international players that align with sustainable development will bring changes to the African trading environment and, hopefully, its readiness to capitalize on larger containerized vessels.