How the Cold Chain and Freight Forwarders have Evolved Together 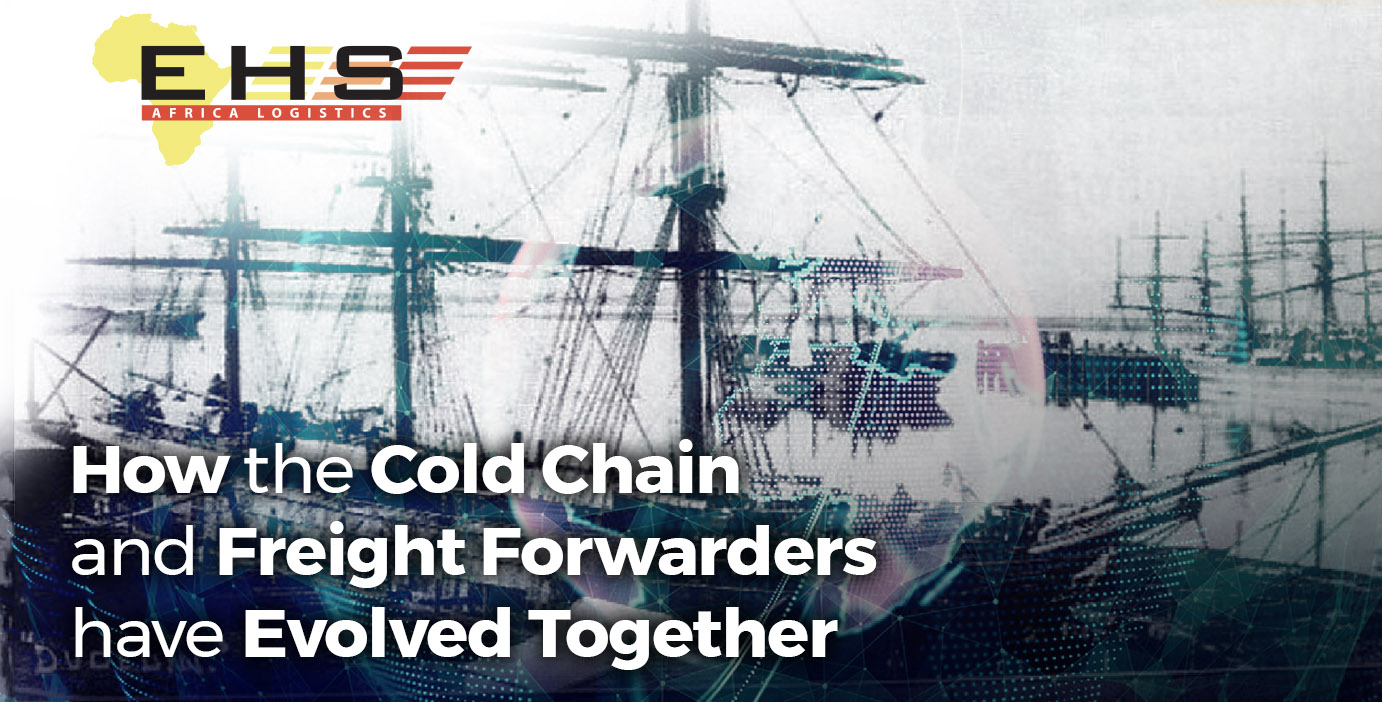 The cold chain and its logistics have come a long way since its emergence in the late 1700s, when fishermen used natural ice to preserve their precious cargo
at sea. Natural ice itself was transported from the east coast of the United States to the Caribbean, and later from Europe to Asia before artificial ice came about. With cold storage and industrial ice production, frozen meat products began traveling back to Europe from warmer climates to alleviate local shortages with surpluses from producing territories – a win-win situation.
By 1902, the first refrigerated banana ships were sailing.

The Dunedin loading at Port Chalmers in 1882. The Dunedin (1876–82) was the first ship to successfully transport a full cargo of refrigerated meat from New Zealand to England.
(Photo from Wikipedia, sourced from Meat and Wool New Zealand)

When cargo took to the skies, perishable goods were among the first commodities to be
transported by air. In fact, when the world’s first daily international scheduled air service launched between London and Paris in 1919, the inaugural flight carried a single passenger and cargo that included newspapers and perishables: Devonshire cream, jam and grouse. (Source: British Airways)
In the early years of the cold chain, its processes were mostly managed by manufacturers, but the exponential growth that refrigeration allowed, coupled with the regulations imposed by local authorities throughout the supply chain, led manufacturers to rely on specialty transport companies. By the 1950s the perishables expertise was already a reality, and third-party logistics providers like Panalpina took on an increasingly important role in the cold chain “niche”.

Transporting perishables by air today
While most perishables are transported by ocean, air freight is now widely used for the most time-sensitive and sought-after products.
However, the traditional north-south-north flows where general cargo was shipped from developed to developing countries and perishables were shipped back are now much more dynamic. Proper cold chain management has allowed both developed and developing countries to produce and consume each other’s products at unprecedented levels. Additionally, the number of trade lanes directly linking the developing countries is growing.
Regulations are another ever-evolving factor, but global forwarders are in a good position to navigate them and offer new solutions that benefit all stakeholders while making sure that phytosanitary and other standards are met.
Cold treatment is no longer required for Turkish cherries imported to China, for example. Turkish cherries destined for China can now be picked, packed and shipped on the same day. It was Panalpina that recently completed the first shipment of cold-treatment-free cherries from Turkey to China. This is set to become an important milestone in the trade of perishables between the two countries. Turkey, one of the biggest cherry producers in the world, now has access to the Chinese market for premium cherries.
Need better cold chain management when shipping your products? Let’s talk perishables.

Succeeding in perishables then and now
What it took to succeed in the cold chain back in the day isn’t much different from what it takes today: you have to know the different local and international regulations, customs, cultural and environmental factors, travel distance and distribution practices. The difference is that the world is now much more complex and it moves a lot faster.
The cold chain itself has changed too. Cooling systems, cold storage, cold transport, cold process and distribution – you have to understand all of these if you want to master it.
You also have to know about the products’ perishability – fruits and vegetables continue to live after harvesting and can change color, flavor, and texture; meat products deteriorate quickly; while live fish requires an adequate level of dissolved oxygen, the right water temperature, pH, and concentrations of CO2, etc.
Factor in the multiple stakeholders, from growers and carriers to retailers and the end consumer, modal choice and the last mile and you get an idea of how complex cold chain management really is.
As the cold chain has evolved, so have we, the forwarders. We began as couriers in a niche and developed into strong and indispensable partners that can provide end-to-end services on a global scale, from field to fork as we like to say. It’s been an amazing journey.
Perishables supply chains will evolve further, but let me tell you, cold chain management will remain at the core of freight forwarding. We are at a vantage point to standardize global processes and innovate services. Exciting times.